As most of us know, 2020 was a year of polar opposites in the business world. Some businesses went bust while others boomed and set new records.

One profitable line of work during the pandemic? Selling illicit goods and services on the Dark Web.

These darknet markets hauled in a record amount of revenue last year, with customers around the globe spending $1.7 billion in cryptocurrency.

Chainalysis, which tracks this kind of spending, shared new research breaking down darknet markets and their geographic distinctions in 2020.

The report says the leading cause behind this growth in revenue is a specific darknet market, Hydra.

Hydra is the largest darknet market in the world, accounting for more than 75% of the total darknet market revenue in 2020, despite only serving Russian speakers.

Hydra could eventually come to the English-speaking world as well. In December 2019, Hydra announced plans to raise $146M in an ICO for a new global DNM service called Eternos. While it appears Covid has put this plan on hold, the announcement makes it clear that Hydra plans to expand.

That could create a significant challenge for U.S. and European law enforcement, as Hydra has developed uniquely sophisticated operations, such as an Uber-like system for assigning drug deliveries to anonymous couriers, who drop off their packages in out-of-the-way, hidden public locations, commonly referred to as 'drops,' which are then shared with the buyers. That way, no physical exchange is made, and unlike with traditional darknet markets, vendors don't need to risk using the postal system."

What are the most popular things for sale on the darknet?

Interestingly enough, if you were to exclude Hydra and other darknet markets that serve a particular region, the darknet markets are much less concentrated with several different markets taking in significant revenue.

When looking at it this way, the largest markets are primarily drug shops and fraud shops, which you can see in Chainalysis' graph below. Fraud shops sell malware, stolen credit card numbers, compromised user accounts of many types, and some assist with money laundering.

Eastern Europe sends and receives the most value from darknet vendors because of Hydra, which is a major market outlier.

The report shows that the percentage of a region's share of drug-focused vendor activity matches very closely with what is known about the global drug trade. Generally, drugs are manufactured and grown in Latin American and Asia and consumed in North America and Western and Northern Europe. Which is what we see on the chart below. 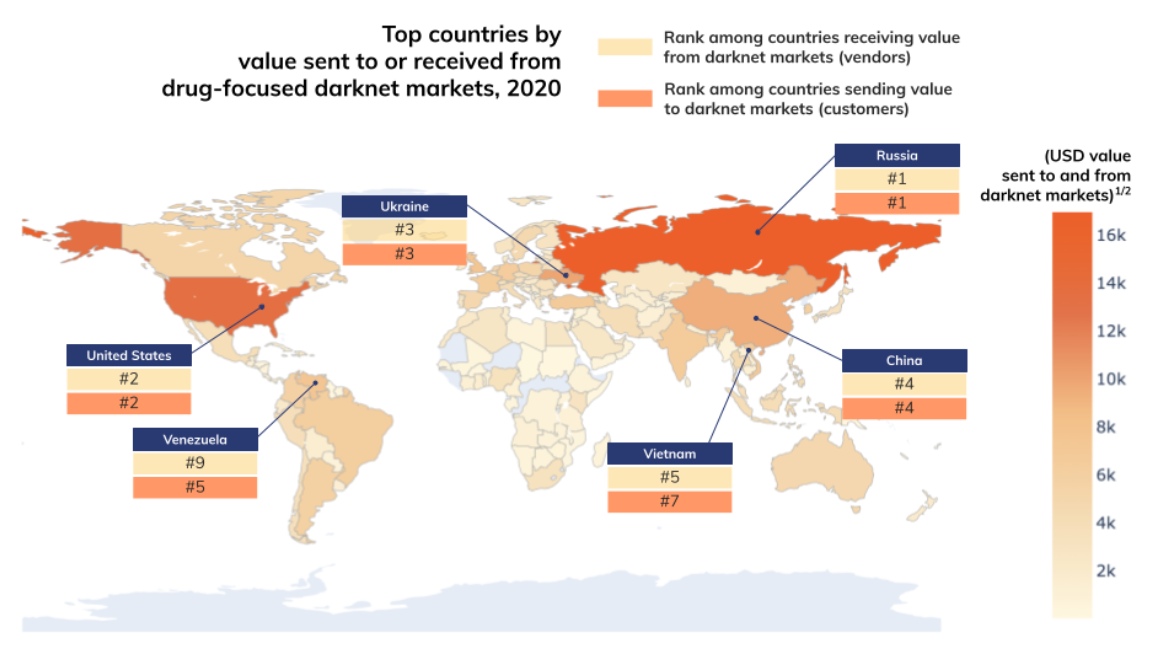 Chainalysis also had this to say about the geography of darknet markets:

"The United States, Russia, Ukraine, and China dominate in terms of value both sent to and received from darknet markets. Venezuela and Vietnam also rank high on both sides, with their activity skewed slightly more toward darknet market buying, which could be related to the drug manufacturing activity prominent in both countries.

We also suspect that a good deal of China and Russia's volume received by darknet markets represents funds flowing to money laundering services concentrated in those countries, though it's possible similar services are operating in other countries receiving large volumes of funds from darknet markets."

For more information on darknet markets, you can read the full report by Chainalysis here.